BJP idiots should stop responding to AAP in media

Here is an interesting quote from a well wisher who works closely with BJP circles who was up in his arms saying,

“Everytime I see a BJP spokesperson participating in a debate with AAP, Congress, I wonder when will our idiots stop responding to media that is making it look like AAP is a national party”.

Why is BJP falling into this ploy and treat AAP as a national party. For heaven sake, AAP has a made a small beginning and we can wish them well, but the nexus of leftists, marxists and Congress left overs are pushing Kejriwal as alternative to Modi and AAP is a national party. Get real. There are many idiots in BJP who wants an opportunity to speak on TV and participate in these debates bringing themselves down.

It is unfortunate even those with stature like Dr. Swamy responding to AAP while senior leader Jaitley responding to water subsidy. That is job for Harsh Vardan to do in the Delhi parliament. Leave Delhi issues to Delhi lawmakers. Most of the faceless leaders of BJP who cannot win a single constituency on their own, reminiscing in their A/C bungalows on why cannot I become the PM are getting jitters about AAP. These leaders are pissing in their pants but do not have the larger heart to support Modi and take the nation to its destiny.

AAP is an organization of far leftists with people like Prashant who are defending terrorists, saying referendums on Kashmir that will eventually break India with other states following. What would happen if Abraham Lincoln did the same thing when Southerners overwhelmingly wanted to separate, will there be a United States of America? Some things are not negotiable and these idiots are perverted to think nationalistically. They look at a poor person on the street and think that they can give subsidy and wipe his or her tears. They will end up making everyone poor while super rich get away. Socialism has gone away from China, from Russia and our morons are using the pervasive poverty left over by Congress misrule to get votes and foist on the nation.

Is AAP interested in building their party or the nation? What as some falsely claim that they will fracture the lok sabha verdict, can India afford to have Mulayam or Jaya Lalitha as PM. There are many external forces and vested interests that want a weak India, better if India is broken. If AAP is interested, it has to stand together with all parties and get rid of the country of Congress that brought the country to disaster. On the other hand, Yogendra Yadav who was advisor to Rahul and part of Sonia NAC running the show and they have audacity to run in 300 constituencies while poor and unwitting Indians are leaving their best jobs hoping these guys will change the nation.

There is too much adrenaline in the AAP that they are wasting away the opportunity given to them by first not learning to Govern and then go national. To this day, Kejriwal has not spoken on Ford Foundation connections because it is now very well known Ford Foundation is an agent of CIA which wants a weak India. This is not a small matter.

It is said that, the worst of evil begins with best of noble intentions. kejriwal may have good intentions, but the company he has does not forebode well and now people are seeing this man is changing tune about going after the corrupt in Delhi. He wanted people to give evidence to go against Sheila Dikshit. CWG scam alone cost India 60,000 crores (13 billion dollars!!!!). The enormous degree of Indian loot is unearthed by prestigious GFI (Global Financial Integrity) with whom I had met at several occassions, that look at outputs and inputs manipulation and showed how multi billions that are siphoned from country. Is Kejriwal going to go seriously against it? Why could he not sit in opposition or join hands with BJP and bring this out. Telling first everyone is a crook and then joining the biggest crook, is that solving the problem? Will in unearth the corruption. Is corruption only financial?

Sadly, people are gullible. I was told by person close to Anna, whom Anna trusts, how the funds collected for IAC movement Anna wanted to use for his activities, but these guys got away with that funds. We need to be careful. For heaven sake, giving subsidies is not a solution, how is that different from Lalloo or Jaya Lalitha giving Free color TVs.

I am no fan of BJP minus Modi but I think AAP is a taking destructive path to the nation. The power is getting into their heads. Gullible people are not seeing the game of Congress and strategy of Ahmad Patel with support of left overs like Yogendra Yadav.

1) Economic Times: Middle Class should be wary of AAP Subsidies

2) Kejriwal, before and after election
http://www.youtube.com/watch?v=tU4ATxMC4Sc&feature=youtu.be 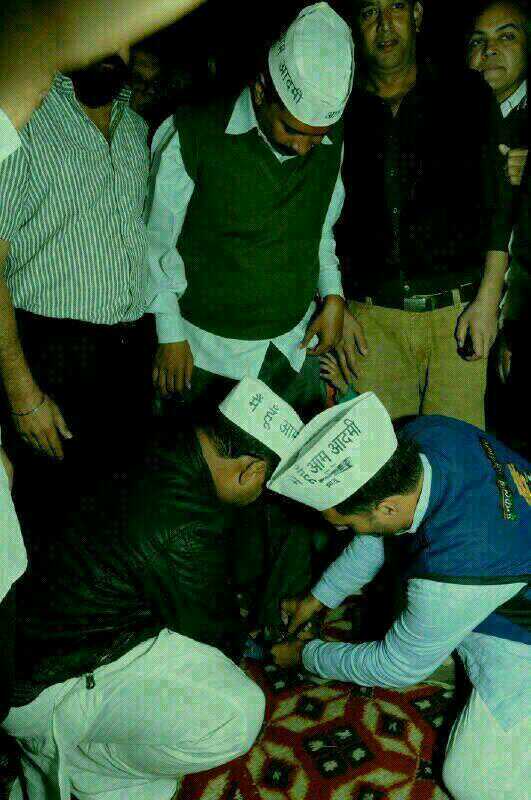