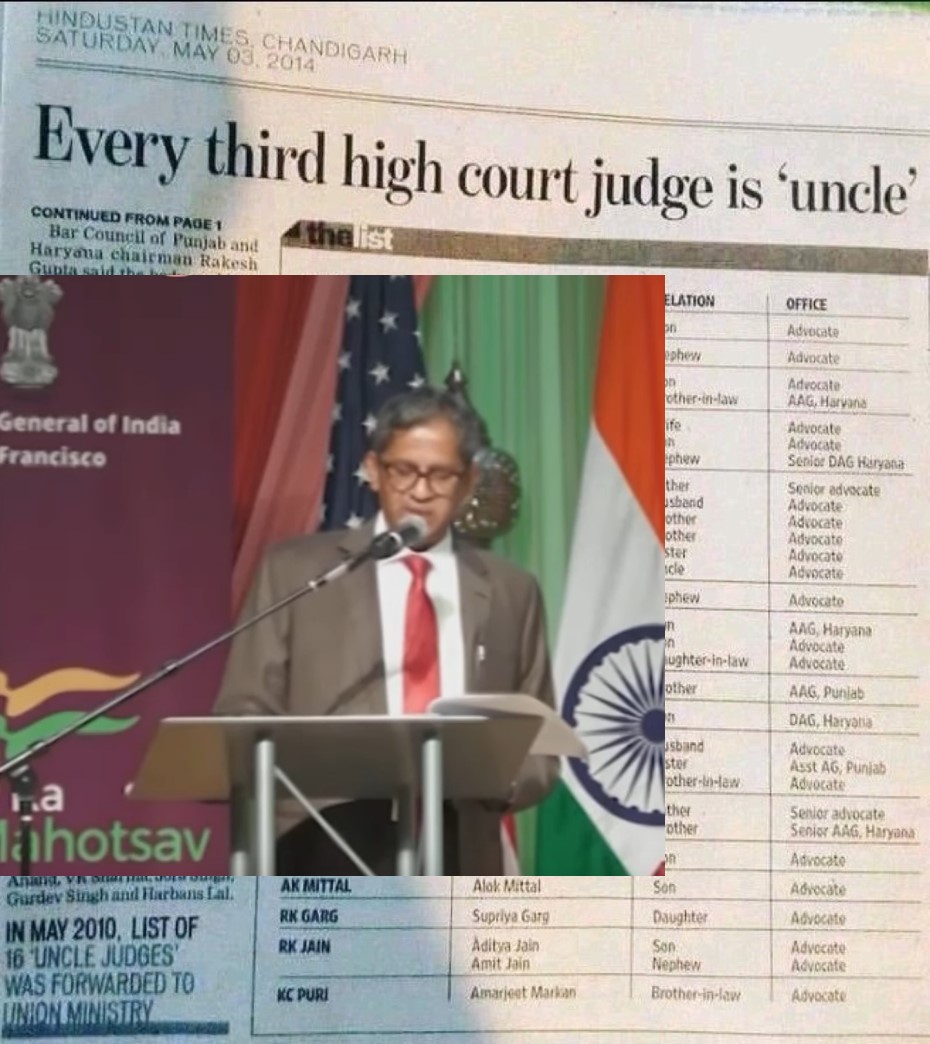 Honorable CJI Ramana,
In your recent address to Indian American audience you said, ‘Let me make it clear, we (SC) are answerable to the Constitution and the the Constitution alone, to enforce checks and balances enshrined in the constitution, we need to promote constitutional culture in India and spread the awareness of roles and responsibilities of individual institutions‘.   Sir, we are at a loss as to which ‘Constitution’ you are referring to.
Let us first start with the selection of the judges.   Sir, where in the constitution does it say that judges appoint judges and that too five judges including CJI will appoint the 30 odd members of SC who will decide the fate of 1.4 billion people across 28 states with 121 languages (and 22 official languages).   Sir, please help us find where in our constitution it says most of the judges should be from a handful of families and we be blessed with ‘uncle’ judges in multiple states where the relatives of the judges practice in the court?  News reports say every third high court judge is ‘uncle’.   Wonderful.    Sir, we also cannot wait for the third generation judges such as the  ‘Chandrachud’ family to reign over 1.4 billion hapless citizens while the papa will do everything to promote him during his tenure in SC  just as many judge papas are doing right now.  A long retired judge recently  lamented that when he meets other  judges these days they introduce their own children as future judges!   Sir, which other nation has a judiciary with complete lack of accountability to its citizens and zero transparency in selection of its judges?  Which nation’s judiciary mandates post-retirement positions for themselves?    Sir, is there anything in the constitution about checks and balances of the judiciary?  Perhaps not,  the framers of our constitution did not see any such need and are assured that judges will conduct in the most sincere and upright manner with the best interest of the nation as is being displayed today. 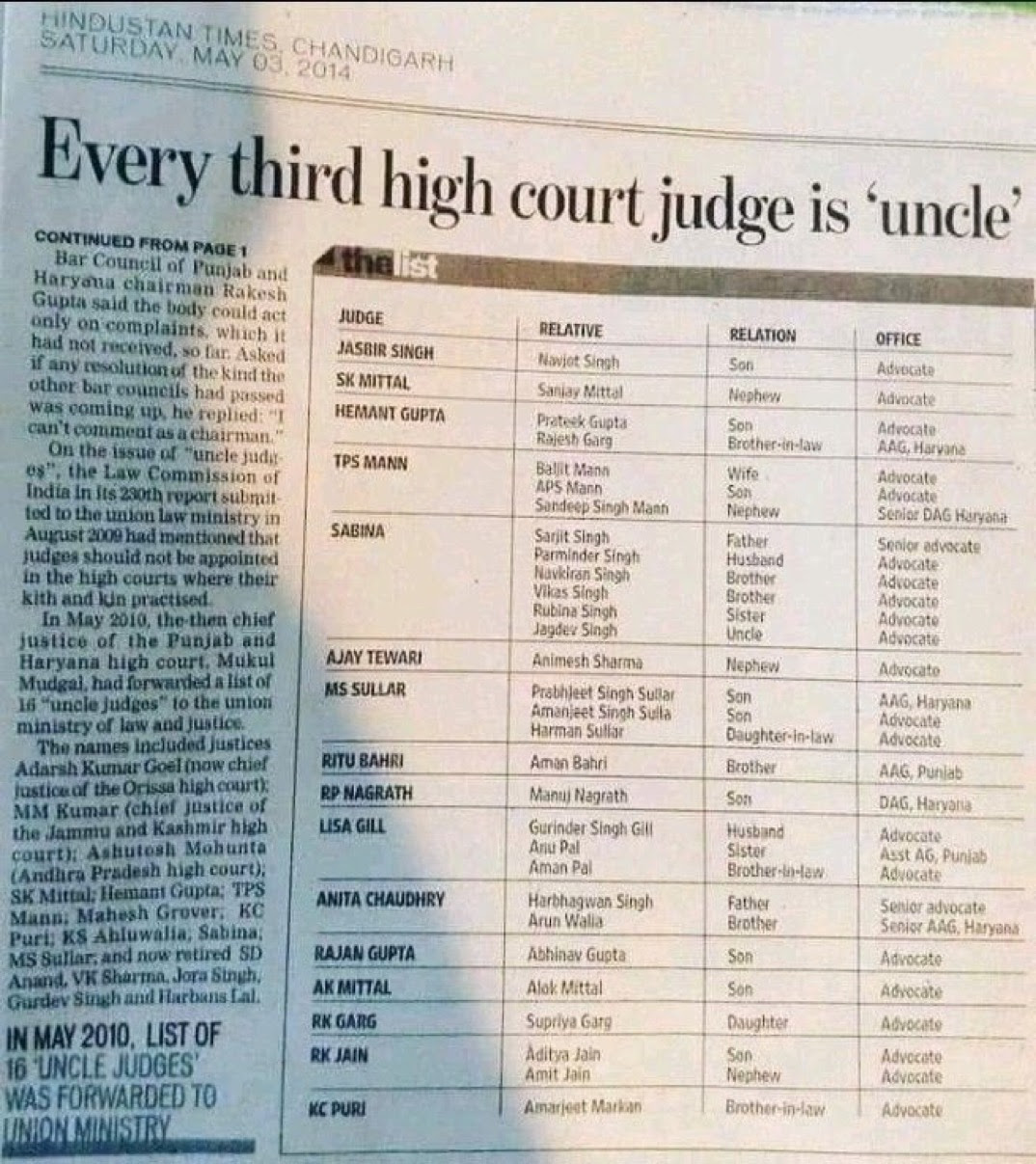 Sir, please help us find where in the constitution does it say a person is guilty without any trial when two SC judges Hon. Judge Surya Kant and Hon. Judge Pardiwala delivered their comments on Nupur Sharma for something that is not even part of the issue she approached the court.   This is against a person where there were 70,000 threats to her life for repeating the same thing that is certain religion scripture said and affirmed by many of their own, that too in the face of enormous provocation, as many judiciary own members, bureaucrats and even army officers wrote to you about.   You recently warned the media and social media about kangaroo courts, ill-informed and agenda driven debates against judiciary,  and that courts will take action, but sir, it begs the question what action you plan to take on these judges who did much worse than kangaroo court and created a dangerous situation for many in the nation. Or Sir, did Shariah law replace Indian constitution?
[Sir, you recently mentioned that Judges can be vulnerable to attacks because of media and social media comments and you are losing patience and will act if necessary.  What about us, Sir?  When our homes are burnt you give bail, when our women are raped and lacs displaced you recuse …..  I can’t resist asking Sir, is this constitution you are following based on some gestapo document?]
Sir, which part of the constitution says the Judges can recuse themselves instead of protecting the fundamental rights of its citizens, nay, the daylight murder of democracy in the brutal post election violence in West Bengal, either because they are afraid for their own or their relatives lives or could care little to protect the women being raped and lacs of people displaced.  You say judiciary is answerable to the constitution alone, please tell where it says judges can recuse their responsibilities while they leave the citizens whose fundamental rights they need to protect from dangerous forces.
Sir, please educate us also which part of the constitutions say the criminals and terrorists have more rights than victims and citizens.   What a great judiciary we have where the supreme Supreme court of India wakes up in the middle of the night to hear about terrorist that perpetrated a massacre while literally 5 crores cases are pending and most arrested spend time in jails more than if they were convicted.   Sir, if I come and burn down your home, do you think I deserve bail.  We even arrest those who recite Hanuman Chalisa in public space without bail!    You are from Andhra, do you know that there were multiple well planned riots in Bhainsa, Telangana by criminals who follow Islamic faith and the perpetrators were let go with bail.   Sir, recently Supreme Court removed death sentence to a criminal of Islamic faith who raped and killed a 4 year old girl while the same Supreme court in no time affirmed death sentence to a criminal of Hindu faith who killed a deranged woman.   I am looking hard sir, where in the constitution does it say that the sentencing needs to be decided not based on the crime but on the faith.   Please educate us.
Sir, while you were in US, there was a raging issue of Roe vs Wade over abortion rights.  I am not sure if you were following the debate, it is based on christian right belief versus the left.  This is based on majority religion, not on Judaism or Islam, Hinduism or any other.   When the Supreme Court of India decided on the issue of menstruating women entry to Sabarimala, an issue of Hindus, it brought into arguments of separate denominations like Christianity.   Per official records, Christian population is less than 5% but then our great Supreme Court needs the Christian denomination concept to address the issue of 10,000 year civilization of Hindus still followed by 70% or more.   And more, this is in spite of temples in the country  where male devotees are likewise not allowed and has roots in local beliefs.   On top of it, the fact the judges seriously discussing about equality of gender rights in the face of not a single Muslim woman is allowed into even one of the lacs of  Mosque spoke volumes.  Sir, which constitution were SC judges (at least 4 of the 5) were referring to when they make such judgements?   Sir, not sure you noticed it, the Original copy of the constitution of India had a photo of Ram, Sita and Lakshmana returning from Lanka to Ayodhya.  Maybe the writers of our constitution violated their own constitution! 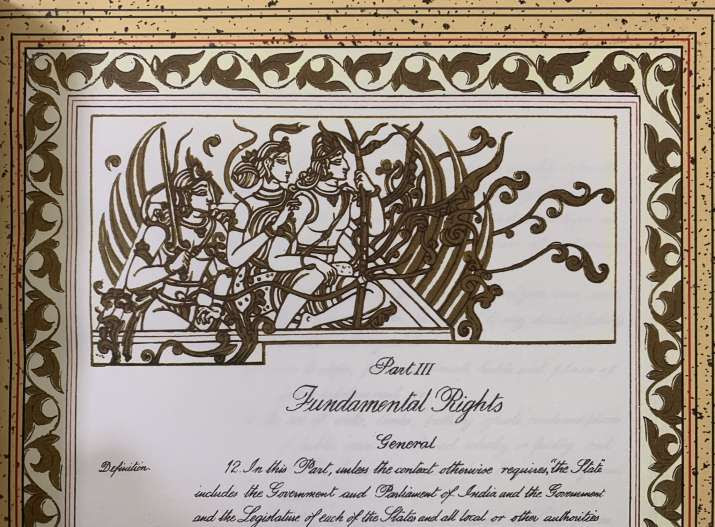 22 thoughts on “Hon. CJI Ramana, please educate us which ‘Constitution’ is the Supreme Court of India following?”