Rallies across cities in the World on weekend of July 11th in support of Tuktukti, a 14 year old bright minor girl from West Bengal who was kidnapped, raped and human trafficked by Islamic Fundamentalists

New York, Jul 7, 2015:  Rallies are held in several cities across the world such as NYC, London, California, Atlanta to save Tuktuki Mandal and thousands of minor girls in West Bengal who are simply picked off streets, gang raped and human trafficked across India and Middle Eastern nations for sexual slavery.    Details of rally in each city is given below.   Human Rights Organizations, Hindu, Jewish, Christian Organizations have sponsored the event in support of the effort.

Other cities that have signed up so far include  Houston, Texas,  Dallas,Texas, Washington DC,  Fort Lauderdale, Florida, Bangkok, Thailand, Delhi, India, Pune, India and Kolkata, India.   As additional cities sign up, they will be placed at the ‘Save West Bengal Daughters‘  facebook page.   Please check the links for the update on the location and time.

Tuktuki Mondal is a 14 year old daughter of a daily wage laborer residing in Khapur village under Magrahat PS in South 24 Parganas district of West Bengal, India has become an unlikely icon symbolizing the fight of women in areas reeling under Islamic fundamentalism. Magrahat is located not far from State Capital Kolkata.  Islamic fundamentalists run the administration locally. She was once kidnapped while on her way to the bank by one local predator, Babusona Ghazi and his friends. She was raped in their custody but was finally released under the condition that there would be no medical examination of her, no police complaint and that she should be married off early, under aged. Agreeing to these conditions at gun-point, Tuktuki’s dad Subhas Mondal was able to secure her release from these local goons. Tuktuki is an extremely bright student, studying in class 10. She was preparing for her pre-final examinations when on the fateful night of May 4th, her house was attacked again. The goons violently ransacked their small house as a warning. Tuktuki and her family tried in vain to resist, she screamed for help, but was dragged away. Subhas did not see her daughter again.  Few days later he was called by anonymous caller to go to a place to recover his daughter, redirected to another place near a Mosque where a 700 people mob nearly killed him.  His family moved out of their village fearing their lives from their village but has not given up to get their daughter back.  Father has reached out to Police, Chief Minister, State commission for backward classes, State Commission for Women and even to Prime Minister to no avail.

Hundreds of callers around the world called police to secure release of Tutukti.   The local goon moves around with 40 body guards sanctions the crimes in the area and run a de facto Government and Police are afraid to since he provides vote banks to TMC in the area.

What shocked those who are monitoring the situation was this is not an isolated case but nearly 100 girls are kidnapped or induced per day and human trafficked to as far as Middle East or across border, across 32,000 villages in West Bengal where Hindu backward classes are a minority.   When NRI community leaders  reached out to the highest police Officials in Kolkata,  one DIG commented that ‘situation is not that bad but it is bad’  and another IPS Officer commented that ‘the number is not that high but in his own jurisdiction there are about 1000 girls who were kidnapped’.   Even if the higher officials have offered to help, in spite of their best efforts they are not able to secure the daughter.   When activists inquired one of the main news media to cover the story they responded that local journalists are afraid for their security to get their own research of facts.   The situation is so alarming that the conditions are no different than the ISIS ruled areas of Middle East.  State Administration has little control over these areas where lawless reins in the hands of local goons who assure votes to the TMC.

The daily kidnapping combined with almost daily riots (there were 4 known riots in a span of 15 days recently) has the agenda of ethnic cleansing of non-Muslims in the area and it is well documented with photos and videos at http://HinduSamhati.net, part of NGO lead by Tapan Ghosh and associates who are bringing the situation to light in spite of major threat to their lives.

The vote bank politics, demographic changes from illegal immigration, rise of Islamic fundamentalism through Madrassa education, Mosques and Dargahs which harbor the criminals and hide the kidnapped girls has created an explosive situation of no return in several districts of West Bengal.   The cuddling of Mamata Banerjee with Islamic fundamentalists for sake of vote banks is well known where  Imran Hassan Khan, founder of banned Terrorist Organization SIMI, known instigator of many major riots, make regular trips to Saudi Arabia and believed to have funneled many crores from Saudi Arabia to Jamaat in Bangla Desh is selected to be the Rajya Sabha member of TMC.   The media bias played no small part to this situation where they refused to cover the ongoings for more than 2 decades because the affected members are from ‘Hindu backward class’ community and publishing such news would cause communal clashes!

People around the world and across the cross section felt deeply touched by the plight of Tuktuki and courage of her father Subhas Mondal who in spite of challenges to his life and livelihood is determined to get this daughter back.  Recently a google hangout with father and Tapan Ghosh from Hindu Samhati was widely viewed across the world and reported by NitiCentral in India. (See video at https://www.youtube.com/watch?v=U7xXpxbBSA4 ).  The tragic situation of kidnapped girls is also captured on short video https://www.youtube.com/watch?v=qcs7nRlZsoI&feature=youtu.be . 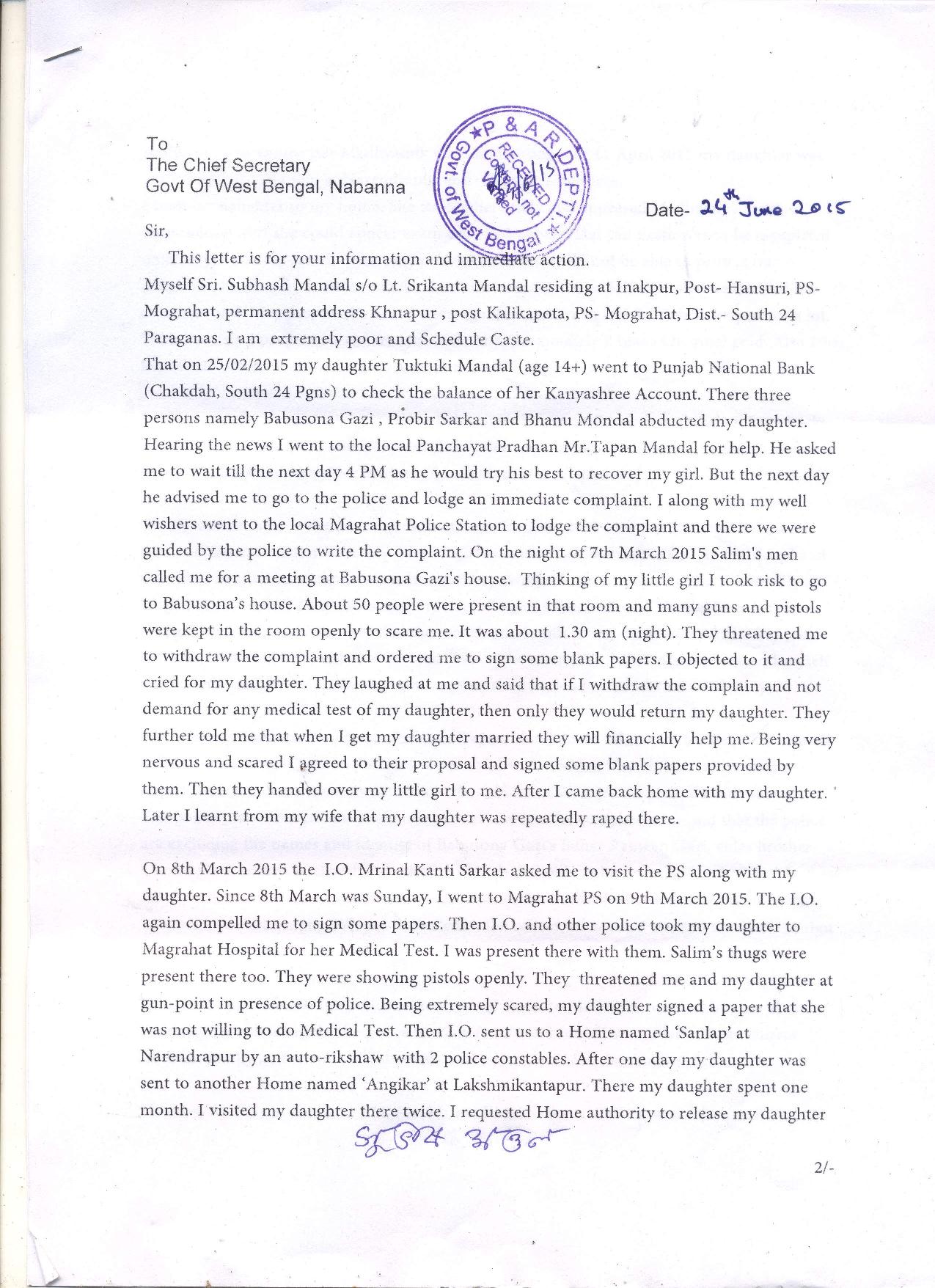 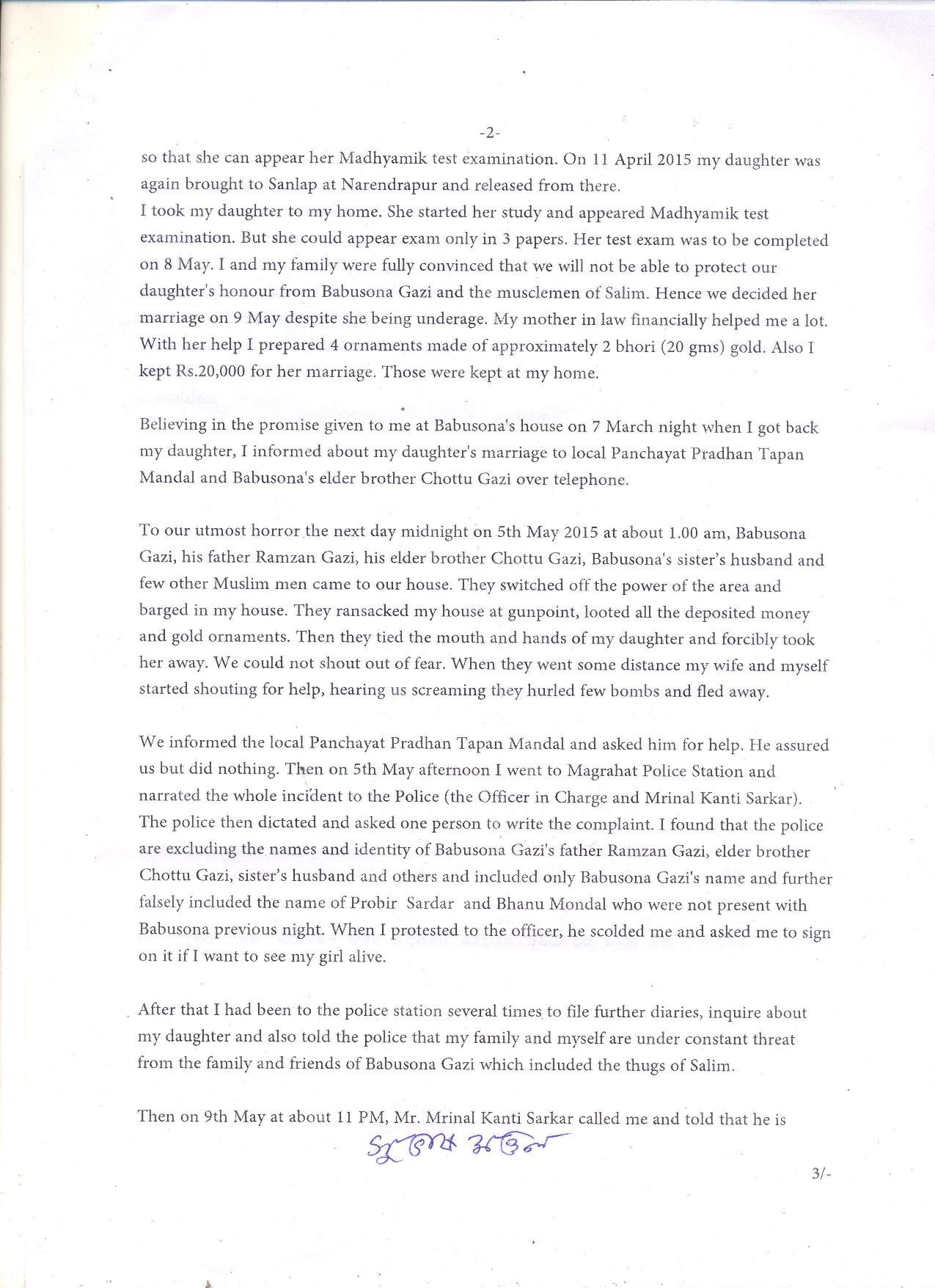 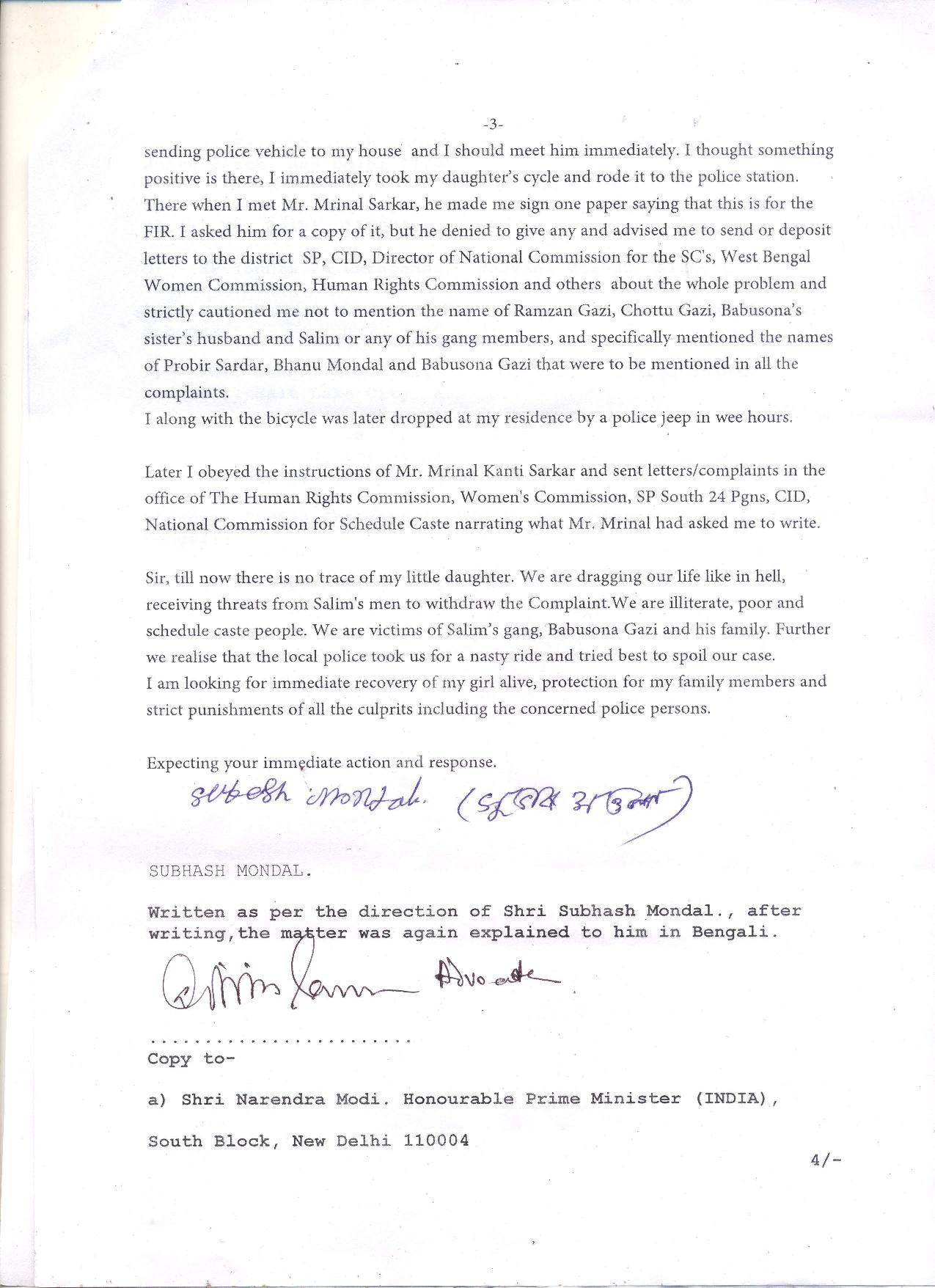