See articles below from NDTV, Hindu Samhati blog, Hindustan Times and Zee TV on how medieval sexual slavery and ISIS type situation exists in West Bengal… it is just matter of connecting the dots.

(Note: Sonagachi in Kolkata is the biggest red light district in Asia with 16,000 brought in as minor girls and 11,000 children of the girls. West Bengal is biggest supplier of minor girls to India’s red light districts and to middle east where minor girls from ages11-15 are simply picked up off streets or allured and forced and many killed when they resist).

NDTV: A trip to a part of Bengal (Sandeshkhali) where humans are bought and sold everyday 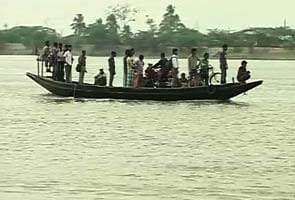 Kolkata:  It takes about two hours by road and then a boat to reach Sandeshkhali, an island in the Sunderbans. This area is infamous for the conflict between its residents and tigers. Now, it has a bigger problem to contend with – human trafficking.

In a reply to a Lok Sabha question on missing people last month, the Minister of State for Home Affairs shared some shocking data from across the country. In the last one year, 14,000 adults and children have disappeared from West Bengal. Most of them are believed to have been swallowed up by the huge trafficking trade that is accustomed to treating West Bengal as its catchment area.

The statistics shared by the government: More than 8000 girls have disappeared, another 5500 males have also been reported missing by their families.

Buyers refer to villages like Sandeshkhali as “a source area.”  In the last 10 years, virtually every household has a mother waiting for a daughter to return. Sandeshkhali was devastated by cyclone Aila in 2009. The natural disasters in this area have left it ravaged physically and emotionally. The region has been drenched in poverty for years. That makes it vulnerable to any offer that promises money, even if it entails sending young children to far away cities.

A mother talks to us about her 16-year-old daughter who left home six years ago when she was promised a job in Hyderabad. The family was told by the middlemen who collected the teen that a part of her salary would be sent home every month. They have never heard from their daughter after that. “They took her for a year but Durga Puja came, Kali Puja came… year after year passed but she never returned,” says the woman in a small thatched house. She has four children including two girls at home with her still. Their monthly income is Rs.1000 – an amount that means when the next buyer arrives, it may not be possible to turn him down.

Remote villages like this one have an established kingpin – in this case, a man named Hari – who serves as the middleman between families here and those in cities who will sell the women into prostitution or to agencies that supply domestic help. When confronted, Hari threatened us and tried to take our camera away. Hari sells the girls to the nearest town. From there, they are traded several times over before they arrive in big cities. Those who are not sold to brothels end up with employment agencies who supply domestic help to homes in Delhi. Many agencies ensure they collect the salaries from employers, ensuring that the help receives no money. Without any resources in a strange and large city, there are few ways to return home or seek help for a better living.

The Ministry of Home Affairs has directed state governments to set up special Anti-Human Trafficking Units (AHTUs) in every district. In West Bengal this initiative was meant to begin three years ago. Each unit is supposed to have a minimum of five persons equipped with camera, cellphones and a vehicle. The need for these cells was felt after a report by the National Human Rights Commission which said in 2006 that nearly 45,000 children go missing every year in India.

When I saw Sandeshkhali my thoughts went to previously post that it is being ruled by one Shahjahan Sheikh – whose entire aim in life is to persecute the Hindus .
http://hindusamhati.blogspot.com/2014/06/shahjahan-sheikh-emblem-of-hindu.html

Sandeshkhali within the Basirhat sub-division of North 24 Paraganas district is no new to anybody and has already got the infamy of being the worst terror-hit area across the state of Bengal. What has more added to its infamy is the incident on May 27 that rocked the national headlines even inviting the visit of central BJP team to inspect the fast worsening situation in the area. On the very day, a group of Muslim radicals with lethal weapons pounced down on Hindus in the area for daring to vote for the Saffron party in the Lok Sabha election defying diktats of Shahjahan Sheikh. What followed next was common; bombs were hurled as if rainfall while shots were fired randomly and Hindus were attacked by sword-wielding criminals repeatedly causing grievous injuries of lots of Hindus and also police officers. And this is certainly not new; Shahjahan Sheikh loves to repeat this and persecute Hindus at times to reveal his strength to all.
Who is Shahjahan Sheikh then? If truth be told, Shahjahan Sheikh is synonymous to law and order in Sandeshkhali. Well, he has an official position too – Trinamool leader and sub-head of Sarberia Panchayat – but most of all he is a linchpin or central cohesive source of support and stability in the area whom none, be it political parties or police and administration, can pass up in dreams even. He joined Trinamool Congress in 2009; prior to that he was the mightiest leader of CPIM in the vicinity and then, Hindu persecution, his most favored game, used to go on under the red, Marxist flag. He was involved in all kinds of crimes ranging from seizing fisheries to smuggling cows across the India-Bangladesh international border under the patronage of CPIM leaders. He joined Trinamool Congress in 2009 with the help of Haji Nurul Islam, then MP of Basirhat parliamentary constituency. The landslide of Trinamool Congress in 2011 strengthened his position instigating him to initiate his second innings of terror with a new party but with the old agenda of anti-Hindu activities. Because of the political clout enjoyed by him, neither the district police nor administration dares to take him on ever, let alone local police. This was best revealed when BJP leaders lodged FIR against him regarding the ghastly attacks on Hindus on May 27. It is said, police, terming it as useless, didn’t start any official enquiry.
And this is also no surprise. On February 1, 2014, at 10 am, activists of Hindu Samhati were busy to glue posters extolling Hindu Samhati’s impending anniversary on February 14, 2014 in Kolkata on walls. Almost 60 local Islamists, led by Shahjahan, attacked them. Three Hindu youths namely Amay Bhunia, Paresh Mandal and Babu Mukle were dragged to the local Trinamool Congress office and were beaten mercilessly. Three youths were left later in highly injured state.  Police was found as a silent spectator.
On February 2, in the evening, the gang of Shahjahan Sheikh unleashed hell once more at Bhatidaha Mallikpara within Sandeshkhali police station’s jurisdiction. At this time, the innocent Scheduled Caste Hindus hailing from Sardarpara in the village of Amjhara within Basanti police station’s jurisdiction and invitees to Dadhiram Sardar’s house at Bhatidaha were attacked while returning. Hindu women, teenage girls were forcibly taken to Muslim residences and were ravished. Police got busy to hush up the incident and warn Hindus of dire consequences. Shahjahan Sheikh owns a governmental land worth 100 bighas in Sandeshkhali; as stated by locals, it is a token gesture. He controls the whole of Sandeshkhali and whenever police is asked of his whereabouts, there is a single answer – investigations to arrest him are going on.
Hindu Samhati regularly monitors and reports violations against Hindus in West Bengal. We also work with both governmental and NGO agencies for proper education on protection and ensure remedies to the Hindu populace as per prevailing law of the land.
When some Hindus had dared to vote for Modi ji last year as a last hope  to end there sufferings, they had suffered extreme brutalities after the election results were out by Shahjahan Sheikh and his men.

It had forced the BJP  central leadership to send  a team there – but once the team left the regular killings and daily brutalities continued. Law and order is a state subject and the centre can do little.

A section of Trinamool Congress leaders patronised Islamic fundamentalist group activists and even shared the dais with one who infiltrated from Bangladesh, a central BJP team that visited Sandeshkhali in West Bengal on May 31 has said in a report to party president and home minister Rajnath Singh on Friday.

“It may be recalled that last August it was reported that a certain section among TMC leaders were also harbouring activists and criminals of the Jamaat-e-Islami, Bangladesh, who had crossed over to West Bengal to create communal tension and fan fundamentalist ideas.

Some of these elements have openly canvassed for the TMC during the last elections and one of them, Abdul Barik Biswas, was seen on a dais with Trinamool MLA Debasree Roy,” the report says.

Refusing to comment on the charges, Trinamool secretary general Partha Chatterjee said, “No matter what they say, the BJP remains a party whose allegations are so baseless that they warrant no reply from us.”

A six-member BJP team led by party vice-president Mukhtar Abbas Naqvi went to the area near the Bangladesh  border on May 31 following an attack by Trinamool supporters on a crowd of BJP supporters celebrating Narendra Modi’s swearing-in on May 27.

The four-page report says the attacks were not just a fight between two political parties but a larger conspiracy to spread terror in the border region through “a nexus of Islamic groups, smuggling mafia, terror elements and TMC goons”.

Kolkata: The West Bengal unit of BJP on Wednesday requested Union Home Minister Rajnath Singh to send a central team to the state in connection with yesterday`s clash at Basirhat`s Sandeshkhali in North 24 Parganas between BJP and TMC supporters which had left several BJP workers injured.

State BJP president Rahul Sinha alleged that the BJP workers were targeted and shot at by TMC goons in Sandeshkhali as people had favoured BJP during the Lok Sabha elections in the area.

“We have informed Union Home Minister Rajnath Singh about what happened in Sandeskhali yesterday. He has expressed shock over the barbaric incident. We have also requested a central team headed by Union Minister of State for Home, Kiren Rijiju be sent to the area at the earliest to take stock of the lawlessness in the state,” Sinha said.
Several BJP supporters and a few TMC workers were injured in yesterday`s clash in Sandeshkhali`s Halderbheri area. Around five persons, with bullet injuries, were rushed to a local hospital for treatment.

The BJP state president also said his repeated attempts to contact West Bengal Chief Secretary Sanjay Mitra proved futile and that Mitra was acting in a biased manner, not giving due importance to the complaints of BJP workers being attacked.
“We have been trying to contact the Chief Secretary since this morning and after more than 30 calls to his office, we could not get through to him. Every time an official picks up and says he is busy in a meeting with the Chief Minister,” said Sinha.

Be it the Salims or Shahjahan Seikhs , parts of Bengal are  being ruled by radical Islamist dons and women are being bought and sold openly.