After FIR against Modi, will EVMs be next?: The Quixotic and partisan EC 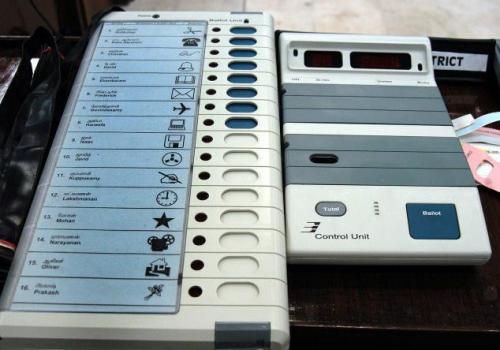 The two articles below on EC action against Modi shows the deliberately partisan way of CEC Mr. Sampath.   Many leaders were showing their party symbol (including Rahul and Sonia after voting).   How come this EC which is so laggard and just gives an apology for six lakhs missing voters, would ensure that a FIR is filed against Modi with such speed.

While we can speculate, the EC could be blackmailed by corrupt establishment because he must have his own skeletons in the closet.

Can India has any possibility to trust Mr. Sampath after this?   What if he deliberately allow manipulated numbers from EVM to be used to tilt the election results as Naveen Chawla did for Chidambaram in 2009?

As article below says, it is time for class action suit against Mr. Sampath by six lakh voters.   Who gave him the right to take away their voting rights?

Any election without its humour and laughable moments is no fun. Lately, apart from the politicians it’s the Election Commission (EC) and its multiple Commissioners and field level Commissioners that have been providing some comic moments. They have this thing called Model Code of Conduct (MCC) which the politicians and other public figures campaigning are supposed to follow. I believe Mohinder Amarnath would have called these guys “a bunch of jokers” without a second thought; such is their implementation of policies and codes. The first and foremost task of the EC is to ensure all voters who wish to vote are able to vote without hindrance. They have failed miserably in this task and someone needs to explain and probably even be prosecuted for this serious lapse. It’s not even a question of a few hundreds or thousands, this runs into millions according to news reports:

There is no denying that the task of conducting elections in India is a huge one. It’s the biggest elections on the planet that can face a lot of hurdles. That is understandable and we shall deal with it later. But why should there be a problem with something as clerical as voter rolls? Six Million in just one state and there maybe others in other states too. That’s not a small number, that’s almost like disenfranchising the whole of Israel or Sweden or Switzerland. The EC apologised for this but this is a crime that needs much more than a mere apology. This is the reason people have stopped trusting even the EC. An earlier CEC, Naveen Chawla, was reportedly talking to Congress party members from the toilet of his office. And after all this the EC gets into idiotic issues of MCC.

First they ban Amit Shah for his “revenge” speech. Then they ban Azam Khan for his “Muslims saved Kargil” speech. Both are idiotic cases and didn’t deserve any action. But like the media, the EC too now indulges in “monkey balancing”. Amit Shah’s ban has been reversed but not Azam Khan’s. I’m no fan of Khan but if he wants to say Muslims saved Kargil, what is wrong in it? At best it’s a lie or not the full truth. That should be combated by other politicians not by the EC. Which political speech during an election does not have some sprinkling of lies and distortions? This whole nonsense of “hate speech” is driven a lot by religious issues. There is nothing hateful in what Khan or Shah said. Why are we so scared that Hindus and Muslims are dumb who will fall prey to such speeches? Are the ECs supposed to act as their Mother-in-law?

There is another moron (who invented the DNA testing system) called Abu Azmi who wants the DNA of those Muslims, who didn’t vote for his party, to scientifically establish if they are Muslims or RSS members. For the record, even RSS has a Muslim-wing. So far, terrorists wanted to hear some verses from Quran or the name of Mohammad’s mother to establish one was a Muslim. Now we have a new method? In case some have forgotten, this same EC covered all theelephants of Mayawati on frivolous claims of other parties that it would influence voters. The EC spent crores on it. Does the EC really believe voters are that dumb? There was even a complaint by Congress in MP to hide lotus ponds. This has been getting sillier with time. Then there’s the question of campaigning or flashing symbols on voting day. Which age does the EC live in?

The EC recently filed FIRs againstNarendra Modi for flashing the Lotus badge while talking to media after voting in Gandhinagar on April 30. The Congress and others complained about it and the EC held a special 3 hour emergency meeting after which they decided to file the FIRs against Modi. This is as stupid as it gets. There’s a 24X7 media beaming sound-bites from various candidates on voting day. There was Nandan Nilekani commenting on BJP and why Congress should win after he voted in Bangalore. In the pic below, others using symbols after voting are doing so deliberately and not accidentally:

There was Meera Sanyal in Mumbai condemning Milind Deora after she voted in Mumbai. There are many such cases and the complaints can be endless. If that is not enough, on voting days at some places there is campaigning on at other towns. The media airs those campaigns. Does it not influence voters? Is the EC under the impression what Modi may say in Bangalore may not have any impact on a voter in Bihar which may have a voting-day? Or are the channels not airing the campaigns in voting areas? What is the point of the whole farce of FIRs and silly actions wasting time from an important exercise in the country? Because the media morons and Congress screamed the EC filed an FIR against Giriraj Singh (Who said Modi-haters must go to Pakistan). The arrest warrant against him has been quashed by the Jharkhand HC. What is so painful about what Giriraj said? (There are already people who have said they will leave the country if Modi becomes PM). It may offend some people but is mere offence cause enough for the EC’s quixotic behaviour? In an interesting story, the state of Ohio in the US has banned negative campaigning and lies against candidates. Although this has been challenged in their SC under First Amendment rights, there is a similar need for dramatic change in our MCC. Operating the same MCC where prosecutable crimes aren’t separated from petty issues drains the EC of valuable time, resources and focus.

If at all the EC and political parties really want to stop this silly incidents all they have to do is have clear guidelines for the media. In this day and age it is absurd not to recognise that channels like NDTV, Timesnow, CNN-IBN, Aajtak and other groups are active campaigners in elections. Each media channel supports and campaigns for a party. The excessive promotion of Mrs Vadra by Arnab Goswami and TimesNow has reached levels of absolute moronery. Even the most stupid and childish things she says and does are peddled as great political insight or skill. Silly Arnab even had problems with someone calling her “Mrs Vadra” because the Vadra name is now associated with land scams which are in the news again. Given all these stupidities does the EC have time for crimes such as illegal voter cards?

The EC has been quixotic in almost all elections. First off, holding a national election over 35-40 day period itself is a very absurd practice. The gaps between voting days provide enough opportunities for political parties to get exit polls from sources and even corrupt media channels to tailor their campaigns in between voting days. It also provides opportunities for other corrupt practices to be extended. The whole exercise has to be modernised and completed within a week. It may be a tall task and require a lot of resources. It’s better to make those resources available and enable elections to finish inside a week. Considering elections form one of the most important parts of a democracy, the new govt must make it a top priority for electoral reforms. That would at least be a start to stop the EC’s Quixotic ways.