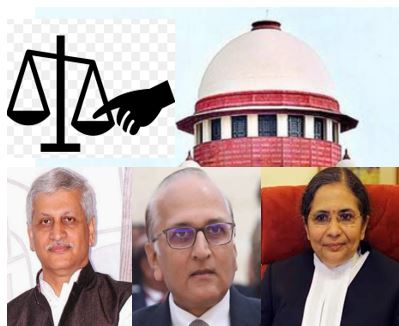 Impeach insane Supreme Court judges leading citizens to jaws of death – tyranny of Indian Judiciary needs to stop!
There is a limit to liberalism or extent of jurisprudence.   The three India Supreme Court judges UU Lalit, S. Ravindra Bat and Bela M. Trivedi has violated every norm of justice in commuting the death sentence of Feroz who brutally raped and murdered 4 year old girl .  “Every sinner has a future”?  What future does the 4 year old innocent girl whose life was snuffed out so brutally receive?   Did they consider the opinion of her family before they delivered this judgement?   In many advanced nations, the opinions of the victims’ family is seriously taken into consideration.
With little accountability from the public, appointing  judges within themselves, worse all judges from a handful of families, the Indian judicial system has gone rogue, utterly rogue.   It is time Bharat rises up to the tyranny of the Indian judiciary, many are as corrupt as much of the  political system in Bharat.
This is the same court that recused itself  in the face of the enormous post poll violence in West Bengal, but quickly issued suo moto after Uttar Pradesh Lakhimpur violence.   They are quick to protect the rights of Rohingyas who are not even Indian citizens (and have known to be committing so many crimes) but would not stand firmly for the rights of 500,000 Kashmiri Hindus who were brutally driven out for the last 31 years and living as refugees in their own country. This is the same Judiciary that closed its eyes to the rampant conversions going on South Bharat and threatened action against the very people who are reaching them out for justice.  This is the same court that interpreted Sabarimala case in terms of western denomination system but has no guts whatsoever to address not a single Muslim woman allowed in the lacs of Mosque in the nation.    While there are so many backlogs in delivering justice, the same people are busy about what height of the human pyramid of Dahi Hindu festival or whether Diwali crackers should be banned but not the pressing issues of the nation.  Just recently they allowed Rana Ayyub to travel outside the country with blatant disregard for the geopolitical challenge the country faces.
How much violence is happening in the country by radical Islamists, how many young girls lives are destroyed completely and even brutally stabbed, some with their throats slit through love jihad, how much colossal change of landscape by the aggressive missionaries happening across the nation, but like Ostrich with head in the sand, these people might as well be from another nation delivering justice to hapless countrymen.   How many under trials spend most of their sentence even before they are convicted, but our judiciary is busy taking vacations and living their high life.  They halt the demolitions but have once addressed the victims of the violence, the loss of livelihood or the loss of life where stones used are more killer weapons than random pelting.
Do they even have any understanding of Indian history or its ethos?   Do they even know its history?  Do they have any grasp of enormous geopolitical challenges the nation faces?   Till today the victims of Delhi protest violence and the security person Ankit Sharma who was stabbed hundreds of times and his body thrown in a ditch or other victims have not gotten justice.  The person who is the mastermind may never get a death sentence, worse even bailed out.   How many times those who were given bail and commuted the sentence went and went on to commit more crimes, sometimes the next day or week but there is little accountability from the judiciary.  Even Pakistan supreme court gave death sentence to those who lynched the Sri Lankan citizen, but our insane judiciary may never give such death sentences while they are living a protected and insulated life leaving its citizens into jaws of death.  While nations like the United States have instituted mandatory sentences, these justices would potentially block such laws even if the legislature instituted such laws.
When there is no strong deterrence, there is every potential for more crimes.  What fundamental rights are they protecting when people have no security,  in fact they are violating the fundamental rights of citizens with their judgements. Completely alienated from the ethos of the country,  these judges might as well be transported to some colonialist nation.
Enough is enough, there needs to be a national movement against the insane, perverted and heavily compromised Judiciary of  Bharath.  It is time for the victims to reach out to the President of the country to appeal to impeach the insane judiciary and make changes to a system we have inherited from the colonialists and refuse to change.
Regards,
Satya Dosapati