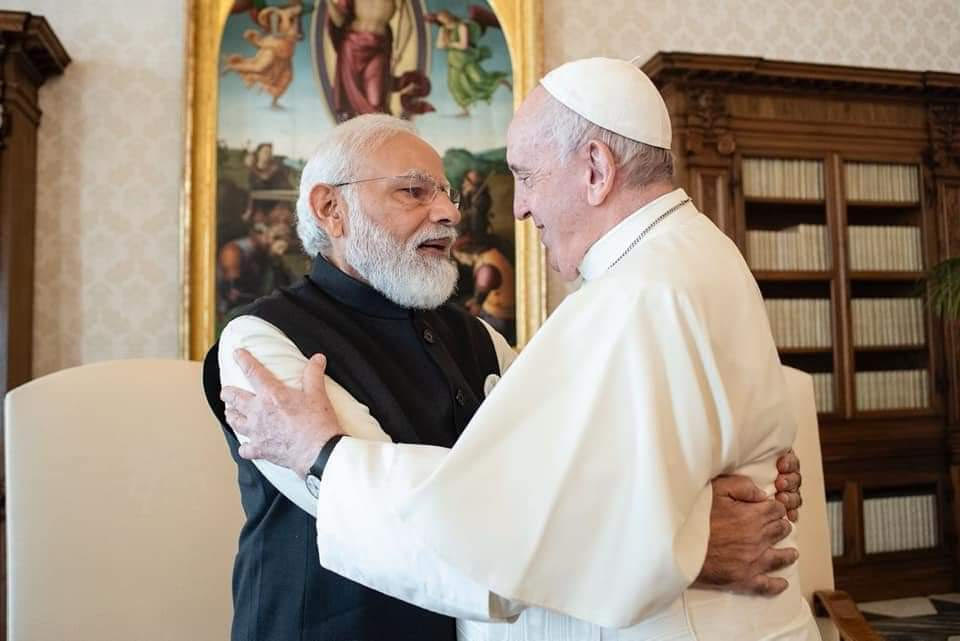 Social media was abuzz soon after the picture of Indian Prime Minister Narendra hugging the Pope in Italy flashed in the media.   This is happening in the backdrop of Hinduism facing enormous challenges both in India and abroad.  In India, systematic aggressive and fraudulent conversions by Church pose an imminent survival challenge to Hinduism in states like Andhra, Telangana, Punjab, Tamilnadu, Karnataka and even West Bengal, curbing celebration of Hindu festivals using dubious claims, demolition of Hindu temples in states like Andhra under a Christian CM Jagan and accelerated phase of conversions under new Christian CM in Punjab.   Abroad, in countries like US there was notorious ‘Dismantle Global Hindutva’ conference with bold insignia of nailing down RSS workers (a similar one apparently being planned in UK), in Bangladesh Hindus were butchered during Durga festivities, in Afghanistan few hundred remaining Sikhs were given ultimatum to convert or leave the country.

Commenting on Modi hug to Pope, activist Mary Suresh Iyer who was an ex-Christian and came back to Hindu fold, wrote,

‘This moment right here is iconic.  Many pagan civilizations have been reduced to ruins as the fight against “the powers that be” were mere shadow fights with what was widely believed to be a “faceless” enemy. Patrons of many pagan civilizations helplessly watched their holy places being destroyed and had no clue as to who declared this war against their gods and goddesses.  The only “pagan” civilization that is still standing firm on the ground is Hinduism and this moment is iconic for every Sanatani as the head of the state of Bharat, Modiji, got a chance to look the enemy in the eye.   This is a “I see you now” moment when Modiji (the state head of the only standing civilization) came face to face with someone who is a descendant and defender of an evil system that has devoured so many thriving civilizations for the past 2000+ years.    Walking into the embrace of an enemy is a daredevil act. This embrace can be used by either one of them to suffocate the other.  Time will tell who uses this embrace to suffocate the other…’.

“Make no mistake about it. The Pope is not a friend of the Hindus. His visit is organized to promote his evangelization activities, his targeting of Hindu India for Christian conversion. The Pope wants to convert Hindu India to Christianity. He would be happy if all Hindu temples were abandoned in favor of churches. He would be happy if all the swamis, sadhus and yogis either became Christian priests or disappeared altogether. He has no praise for a Ramana Maharshi, a Sri Aurobindo, a Ramakrishna, or a Shankaracharya. He does not honor the Vedas and the Gita like the Bible. He does not allow pujas to the Gods or the chanting of Om in churches. He has nowhere apologized for the use of the Inquisition in India or elsewhere. He has nowhere said that Hindus won’t go to hell. He may claim to honor India’s spiritual traditions but not to the extent that it requires him giving up his efforts to convert Hindus.”

While Swami Vivekananda and Tagore have spoken passionately against conversions, perhaps no politician in Bharath has understood the Church and its conversion agenda as well as Mahatma Gandhi did.    He understood with clarity that the conversion agenda is part and parcel of Western imperialism agenda that subjugated the populations and pillaged their resources across the world.   He knew too well that it is a ruthless and diabolical agenda that eliminated many native civilizations and its aim in India is nothing short of uprooting Hinduism from its very foundation.  This is in spite of Gandhi allowing himself (as many believe), ‘a stooge of British rule in India’.

“Christianity in India has been inextricably mixed up for the last one hundred and fifty years with British rule. It appears to us as synonymous with materialistic civilization and imperialism exploitation by the stronger white races of the weaker races of the world. Its contribution to India has been, therefore, largely negative. (Young India: March 21, 1929”

In Harijan magazine in 1937,  he wrote that missionaries are vendors of goods whose aim is to uproot Hinduism from her very foundation.

” My fear is that though Christian friends nowadays do not say or admit it that Hindu religion is untrue, they must harbour in their breast that Hinduism is an error and that Christianity, as they believe it, is the only true religion…so far as one can understand the present (Christian) effort, it is to uproot Hinduism from her very foundation and replace it by another faith. (Mahatma Gandhi, Harijan: March 13, 1937)”.

What is more, Mahatma Gandhi strongly advocated for ‘Ghar Wapsi’ and legislation to curb conversions.

Most cases of conversion… have been in my mind a false coin… I would therefore unhesitatingly re-admit to the Hindufold all such repentance without much ado … If a man comes back to the original branch he deserves to be welcomed … in so far as he may deem to have erred, he has sufficiently purged himself of it when he repents his error and retraces his steps.  (Collected Works: Vol. 66, pp. 163-164)

While India recognizes external threats such as China or Pakistan at our borders, there is a more dangerous threat going on all across India.   Conversion activities and other unrest in India such as Delhi riots, radical Islam,  farmers riots and even aggressions at our borders are not unrelated.  In fact they are deeply connected with Western deep state which is using missionaries as a tool to control, contain and convert India, similar to what was done throughout history.   Tehelka paper undercover investigation from the early 2000’s covers how deeply connected are Christian missionary organizations working under Joshua project with CIA, USAID and State Department.  There is a good possibility, election strategists such as Prashant Kishore who is engaging in Goebbels type propaganda and creating dangerous caste divisions in Andhra, Bihar and other states are closely working with the break India forces to either defeat or considerably weaken Modi in 2024.

Even decades after Rajiv Malhotra’s seminal work, ‘Breaking India’ that meticulously detailed the diabolical agenda, India has not come to grips with the dangerous situation we are seeing today.   Rakesh Krishnan Simha, a defence analyst published a detailed article ‘Why Christianity poses a clear threat to India’ , that is a must read for every India’s national strategist.    Legal activists like Sai Deepak as well as  others have commented on how going from one election to election and not addressing civilizational issues, the BJP Government is missing the opportunity to make bold changes before it gets to a point of no return.  Even if there are temporary electoral losses, it is critical for BJP to make bold changes to ensure the future and progress of Bharath for millennia.   It needs to bring vulnerable tribal and backward caste populations into the mainstream fold and create laws to thwart missionary vulture tactics.

The Modi Government needs to recognize that addressing only development without boldly addressing civilizational issues,  all the hard work to develop the nation could evaporate quickly.  We can learn from history where 500 years of Vijayanagar empire was utterly destroyed in just a matter of 5 months.  Just in a decade down the road, there is very little chance for BJP to come to power with enormous conversion and demographic changes happening across India (unless it morphs itself into another pseudo-secular party).   It needs to evaluate its relationship with terminal and deranged thug like Jagan in Andhra.   In the article, ‘5 mistakes Modi need to address‘, the author also discussed how important it is to decolonize the Indian mind by teaching true history and accomplishments, free Hindu temples and urgently implement national laws against conversion and acculturation perhaps with an independent national body.

Are we ready to challenge the existential threat to civilization boldly or are we going to be too cautious and apprehensive to take needed bold actions and lose another opportunity in its history?

0 thoughts on “Modi – ‘I see you moment’ – with Pope – What Modi can learn from Gandhi and others in countering Church dangerous agenda.”