There is another case breeding now in UP Kanpur where a poor Hindu man named Sanjay Tiwari from UP, a 13 year old studying in class 9 was abducted by Sher Ali Khan who is about 50 years old (he has his own son).

Sanjay Tiwari though poor, went out to help the daughter of a widowed woman in Kanpur whose daughter was kidnapped by one of people of Sher Ali Khan.   Sanjay Tiwari helped the widow to file an FIR and police went to Lucknow to get the widow’s daughter recovered.   Now as part of revenge, Sher Ali Khan kidnapped his daughter saying now see if you save your daughter.  The daughter was getting some things asked by her sick mother.  This happened on Sept 7, 2015.   Police are not helping him.
We need to wake up to this dangerous threat Hindu Samaj is facing.   We are seeing how we can help by contacting BJP MPs in UP.  Not only that, even if we recover his daughter, it is insanity to just keep quiet, they need to arrest and convict those who are committing such crimes.   Below is his post on twitter and his phone number +91 9936812421. 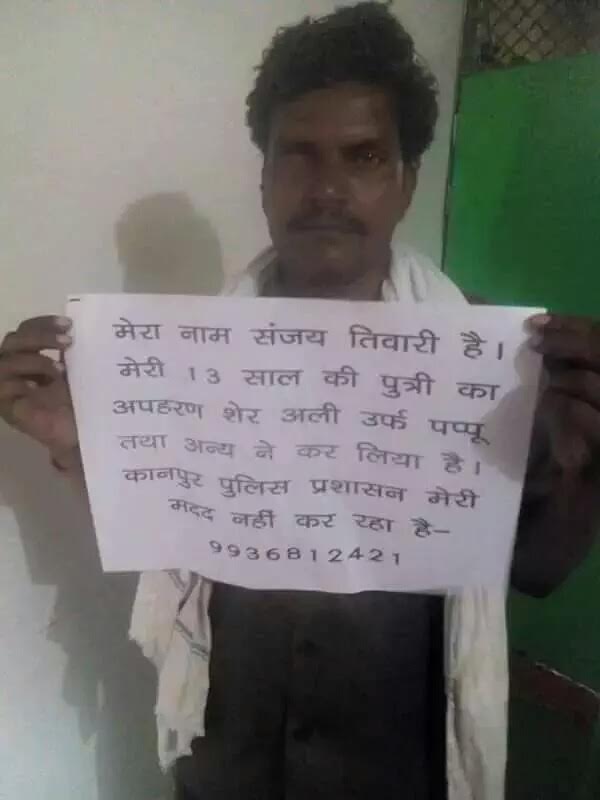