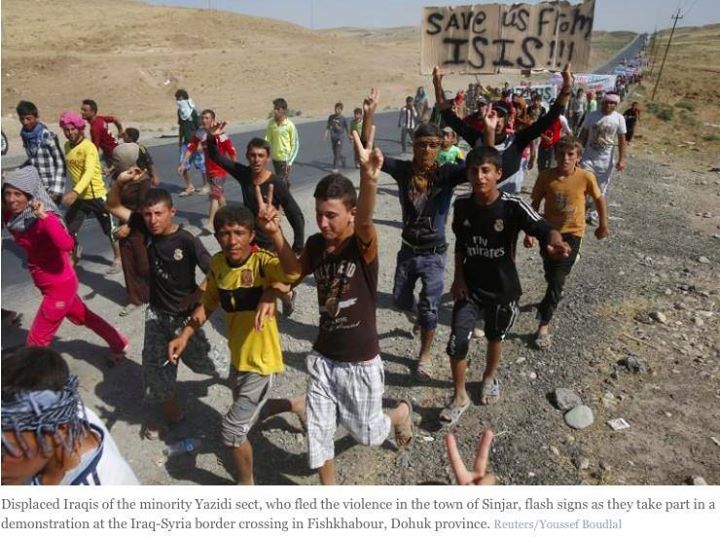 On Friday, October 24, members of the Yazidi community of Iraqi-Americans are demonstrating to  STOP GENOCIDE OF YAZIDIS NOW!  The demonstration scheduled for 2-6  PM near the White House (Lafayette Square, H Street and 17th St., NW District of Columbia) is an urgent plea  for the U.S. intervention to halt the murderous ISIS campaign  of forced conversion, enslavement, and genocide of Yazidi men, women, and children in the Sinjar area of northern Iraq.  Since their initial attack on Yazidi homelands on Aug. 3, the Islamic terror army ISIS has killed several thousand Yazidis, displaced over 300,000, and engaged in the mass kidnapping of nearly 7,000  Yazidis—primarily women and girls.

ISIS jihadists have publically disclosed that their campaign of mass kidnappings of Yazidis is part of a 21st century slavery revival project—a program to resume early Islamic slavery norms of seizing women as war booty to be used as concubines. In the last three months, thousands of Yazidi families have been rent apart as their female members have been kidnapped as sex slaves.

Three months since President Obama began a campaign of airstrikes against Islamic State forces in Iraq, ISIS  still controls almost all  Kurdish and Yazidi territory they seized.  This week local Yazidi volunteers trying to defend the remaining Sinjar villages that haven’t yet fallen to  ISIS  experienced major losses. Although the U.S. has engaged in some airstrikes on ISIS targets,  there have been few to aid the Yazidis and even fewer  strikes which aimed at the most essential targets. For three months, Yazidis have been requesting airstrikes on ISIS forces in the Sinjar area—to push ISIS back and to help free the kidnapped women.

The Yazidis are under siege and the delegation here is calling for immediate action as the fate of the Yazidis will be determined in hours, not days or weeks.  A genocide is underway, and neither the Iraqi nor the Kurdish governments have provided effective protection to the Yazidis.  US action is the only thing that can save Yazidis now.

Time is running out. We call for urgent action:

2) Free our kidnapped women NOW: The US must use appropriate airpower to help rescue thousands of Yazidi women and girls kidnapped by ISIS to sell and used as sex slaves

More about STOP GENOCIDE OF YAZIDIS NOW
What:          Public demonstration to free Sinjar and save the Yazidi minority

Who:            Yazidi communities in the US including the American Yazidi Foundation in Houston; Yazidi Community Organizations in NE, VA, & DC; and anyone who stands against the rule of terror and slavery.