Patna bomb blasts against Modi rally is no small matter

Oct 29, 2013 aam aadmi party, bjp, congress party, corruption, narendra modi, nitish kumar, sonia gandhi
We all know about the forces against Modi.   The multiple bombs at various points in the rally is clearly with intention of instilling fear to those who are attending Modi’s rallies and blunt the support Modi getting across the country from lakhs of Indians.Is that the only goal, or is there more to it?   Why trouble with all this, if they can get rid of Modi itself.  The bomb right under the stage indicates there is a possibility of collusion with various players in an attempt to eliminate Modi.     Many speculated for months now that the crooks will unleash Jihadis against Narendra Modi.   For all we know, this can be a pre-cursor for what could be yet to come when the time is ripe.   Those who plan such activities try out things as pre-cursor.   When Rajiv Gandhi was killed, the LTTE person first tested how things will go on VP Singh.    After the tryout she went to blast Rajiv Gandhi. 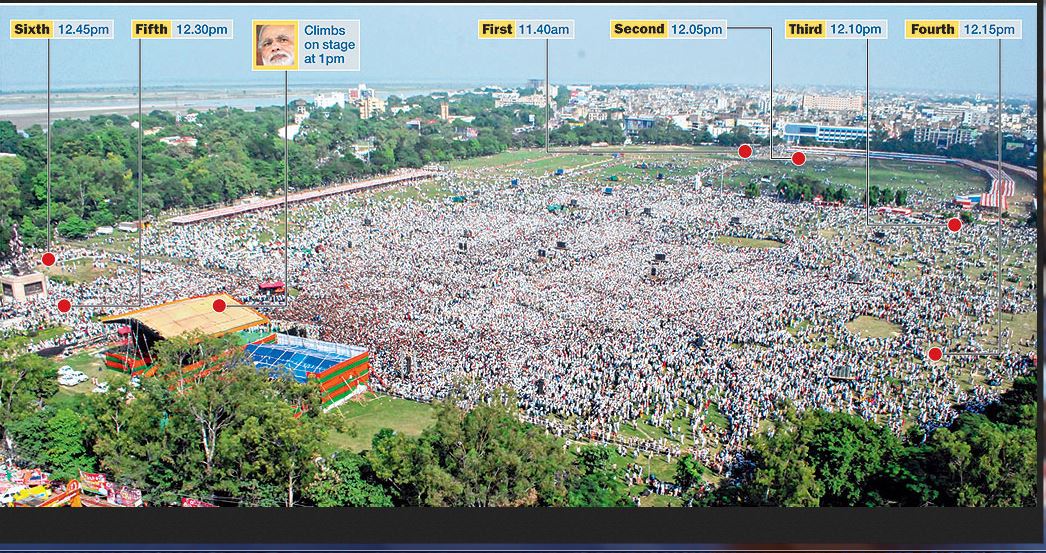 Political killings are hardly investigated in India.  Many know how Lal Bahadur Sastri was poisoned in Tashkent.   In fact, USSR secret agencies such as KGB are well known for killing opponents by poisoning.   Why did KGB do it?   Many of the Congress leaders who are threat to ascendancy of Sonia Gandhi as party chief died mysteriously.   Madhav Rao Scindia, who is known to be a lover of Sonia Gandhi died on a flight when the plane he is flying had zero fuel!!   YSR is believed to be cut short because he has become a threat to dynasty.  After Rajiv Gandhi murder, Sonia’s mother is believed to have reached out to Pope and Italian Mafia to help her.   Sonia owes a lot to Opus Dei and mafia.

The cut throat and unscrupulous Congress Party and its dirty tricks department who tried to frame charges by hook or crook on Modi, that too for killing a known terrorist through encounters may very well have hand in this.  They most likely will do this on non-congress turf.   This way if it failed, they can’t blame on Congress and will not hurt them.   All they need is a willing partner in the state who has to be indifferent to security arrangements and the jihadis will be given free run, perhaps even ISI .  If they do not have willing partner in the state, they can force on them by threats of CBI cases on some of the jokers.   The anti-Modi forces are many and they have enormous resources looted by robbing billions from the nation.
What explanation Nitish Kumar has for what happened?   What has he to say the families of those who lost lives or injured? There is little doubt he purposely allowed security arrangements to be lax.    Will this fellow be the new Charan Singh to wipe out hopes of millions of Indians? It is a matter of great shame we have such people who will sell our country for personal ambitions.  From Jayachand onwards, India suffered immensely due to such small minded persons.
The country need to rise against this.   Indian politicians will be lynched, Mahatma Gandhi was believed to have said if the rulers are indifferent to suffering of people.   I hope these amoral and unscrupulous people will not stretch the patience of Indians to such an extent.
I understand the rally was continued even while the blasts were going on.   Peoples lives are more important and I am not sure if BJP evaluated what is in best interest of the people, whether to continue or stop. One thing is clear, we cannot continue status quo about these rallies but at the same time,  we cannot allow few mean minded people stop in changing the direction of our country.