A Community Gathers to Mourn the Loss of a Once-in-a Lifetime Leader: Family, Friends and Community Leaders Pay Tribute to Narain Kataria 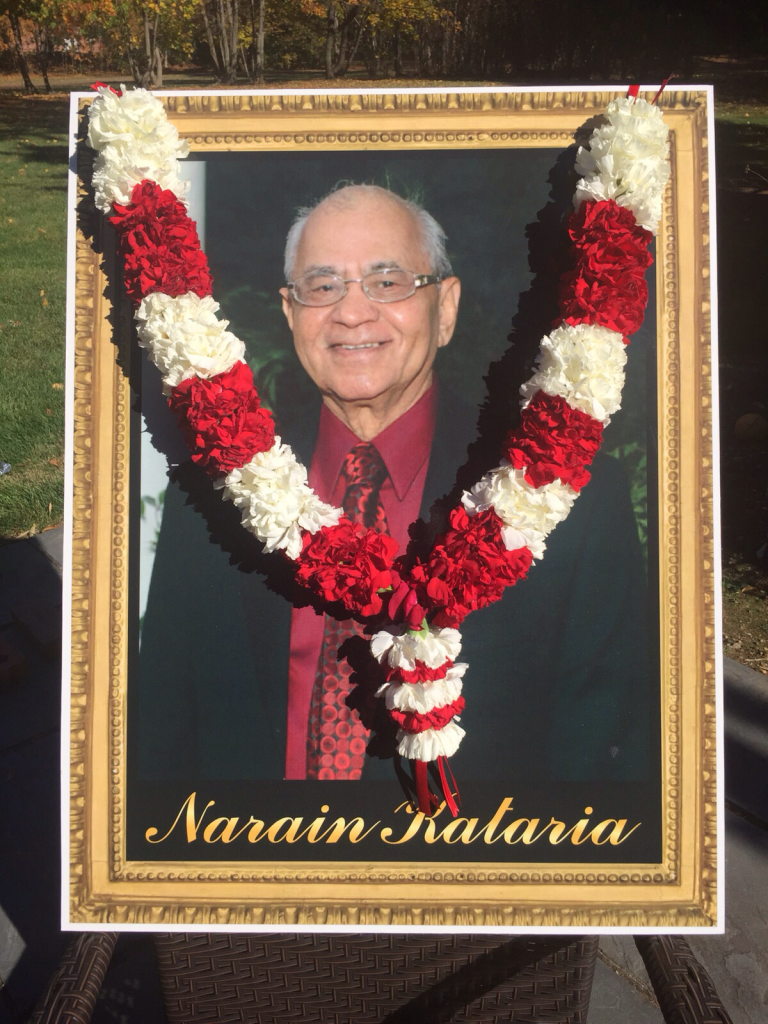 It is befitting that the funeral ceremony for Narain Katariaji, the indomitable leader of the Hindu activist community in the US, coincided with the day that thousands of people marched and rallied in India in support of a united, proud India whose inclusivism draws inspiration from her great civilizational heritage. Katariaji himself was always leading marches, rallying together the community, energizing crowds, with placards and signs he made and paid for himself, always in support of Bharat Mata and Hindu Dharma.

The funeral ceremony for Katariaji took place in New Hyde Park, Queens on November 7. It was standing room only as hundreds of people came to pay their final respects to this great hero, some traveling from quite far away just to offer their shraddhanjali. The gathering demonstrated an outpouring of genuine grief from many different quarters, from his large, extended family with grandchildren who were visibly distraught at his loss, from friends who were almost inseparable from him when he was alive, and from a community devastated at the loss of he who had pioneered the Hindu activist movement in the US, who ceaselessly worked and devoted himself to awakening Hindus and to serving Dharma.

Over the past few days, ever since the news broke about his sudden death, shocking the Hindu community worldwide, so many people have been calling and writing to share their sense of unspeakable loss and their deep admiration for his life and legacy. These tributes can be found at www.narainkataria.com. Many memorial meetings and spontaneous acts of honoring Katariaji have been taking place. Condolence meetings were held in several cities across the U.S.

Katariaji died a remarkably auspicious death, a yogi’s death. He passed away in his sleep peacefully with nary a sign of serious health problems beforehand, despite being 84 years of age. Just the evening before, he had given an interview on TV about the anti-Hindu bias in Indian media.

Katariaji led the life of a karma yogi. As several individuals noted during the ceremony, Katariaji was a suit-boots sanyasi who inspired thousands of Arjunas worldwide with his passion and idealism. His one-bedroom apartment in Queens was described as an Ellis Island where all who came from India passed, being welcomed and supported by Katariaji. Many noted with awe how he worked tirelessly day and night, with more energy and gusto than a young man of 20. He devoted all of his income to the Hindu cause, leading a very frugal lifestyle.

Katariaji began his activist days by writing letters to the editor of different newspapers, showing how they were suppressing the truth about the situation in India, how Hindus were suffering and the dangers posed by the leftist axis of powers prevailing in Indian media and the government. Though he was a lone crusader, he never minced words or backed down, and slowly he began developing a following of people who recognized he was speaking the truth and was unafraid of the consequences. Katariaji bravely denounced the spread of Islamic extremism and violence, building alliances with other anti-jihad groups and individuals in the US. He was uncompromising in his principles, despite the avalanche of condemnation and threats he received from the extremists and those who favored political correctness over the truth.

Katariaji founded the Indian American Intellectuals Forum and was the inspiration behind Justice for Hindus. His landmark achievement is the establishment of the Hindu Unity Day, which he founded in the mid-1980’s. From humble beginnings as a small event held in a school basement, Hindu Unity Day has become a huge event, attracting many hundreds of people each year. People would travel far and wide to attend this great conclave that attracted famous speakers each year famous like Dr. Subramaniam Swamy, Baba Ramdev, Rajiv Malhotra and others.

For Katariaji, Hindu unity was not to be celebrated just one day a year. He lived it every single day of his life. He contributed selflessly his limited funds to so many different Hindu groups. He would attend any event in the Tristate area held for Hindus in order to show his support.

Katariaji also led a remarkable personal life. He was born on February 15th, 1930 in Sukkur, Sindh. At a very early age, he lost both his parents and took the responsibility of looking after his three younger brothers and his sister. He never forgot the horrors he and so many other millions of Hindus faced during the Partition of India in 1947. Katariaji had a Masters in History and worked as a legal assistant in the law firm of Cahill Gordon in Manhattan. He retired from the firm in 1998.

Katariaji was a doting father, grandfather and brother. One of his granddaughters spoke lovingly about how they would ride on rollercoasters together, how he would enjoy it so wholeheartedly and scream along with her, and that he truly lived life to the fullest. His brother described how they would meet every day, and the first question Katariaji would ask him is what did he do that day, not what he ate or what he saw on TV, but what did he do for Bharat Mata, for Dharma.

Katariaji had a deep love for music and was a talented player of the banjo. He played with several musical orchestras and he trained his daughters how to sing. He was passionate about music and last played the banjo just a few weeks ago.

It is important to keep alive the legacy of Katariaji and to ensure that his work continues. It was suggested at his funeral that a day be picked, either his birthday or his death anniversary, where we all gather each year to celebrate his life and legacy and renew our commitment to taking his mission forward. The website www.narainkataria.com will compile all of his writings and talks and will serve as a portal for celebrating and honoring him and finding ways to carry forward his mission. Please visit the web site to offer your tributes and to learn more about this great man, so sorely missed by all of us today.